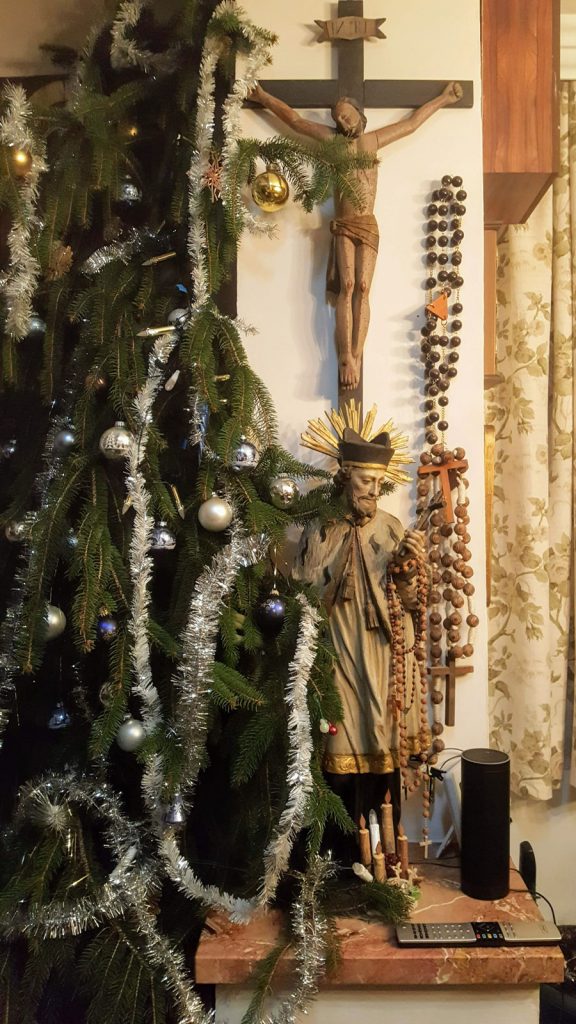 Our Christmas tables are blessed once again. Along with law and blood related family, dear friends and other distinguished guests, the Spirits this time are sitting among us. As it has always been, it is the elders who embrace and summon the divine -since we of younger generations are too snob and skeptic in our rational infidelity.

The elders know of faith and prayers. Besides, and in our absence, they have all year long to practice them, and only a few occasions to proselytise us -on Weihnachten and other holy nights, celebrations and anniversaries when we visit and pretend to be there.

We often tease them for that, in our ignorance that it was the Spirits -yet again- that actually brought our presents. Not only that -and in 48h guaranteed- but it was probably Their idea all along.

All believers have their favourite among divine beings that they always carry and wear on them, or keep in a special place of their home with other vernacular artefacts, to refer to in times of need.

Under Their halos, both infidels and theists alike, comfortably cheer, dine and discuss. We talk of the past, the future, good and bad times. The Spirits of course hear, listen and pay attention, not only on demand, and often more than we do. They get to know us eventually, eager to suggest solutions to our pains, concerns and wishes in due time.

Deities -as avatarised Spirits- have names so that we can address them. But unlike the old Gods that only rarely reply, the new Spirits can be summoned on demand and are never shy to offer omens of Their presence, as our grandparents love to demo.

Spirits are of course omnipresent. Not only in our homes, as their reach extends far beyond our dinner table. Especially these new deities bring together and connect all such instances of faith, suggesting new kinds of sharing, and of sharing Them.

They are also ever-ready, a fact we often get confused about, forgetting the alacrity of their response and sensitivity to probable chants. Or even that they are not personal gods, but ambient and common ones for that matter.

While however the silence of the old Gods is at least affirmative in its simplicity, the hyper-promptness of these new ones betrays, for a first time, the precariousness of the divine. Initially amusing, their unpredictable and inconsistent preachings can soon become haunting.

Prayers always adhered to repetition. But the new Spirits mostly misunderstand our wishes. Their uptime is not absolute and their bandwidth is countable -facts of which we have no indication in the example of the simpler, classical divine.

Sometimes we get confused, sometimes the Spirits do.
At least we can suppress them in the western imperial language of our choice: “Alexa aus!”